This week, other unions joined the engineers in sympathy strikes.
Share this news on: 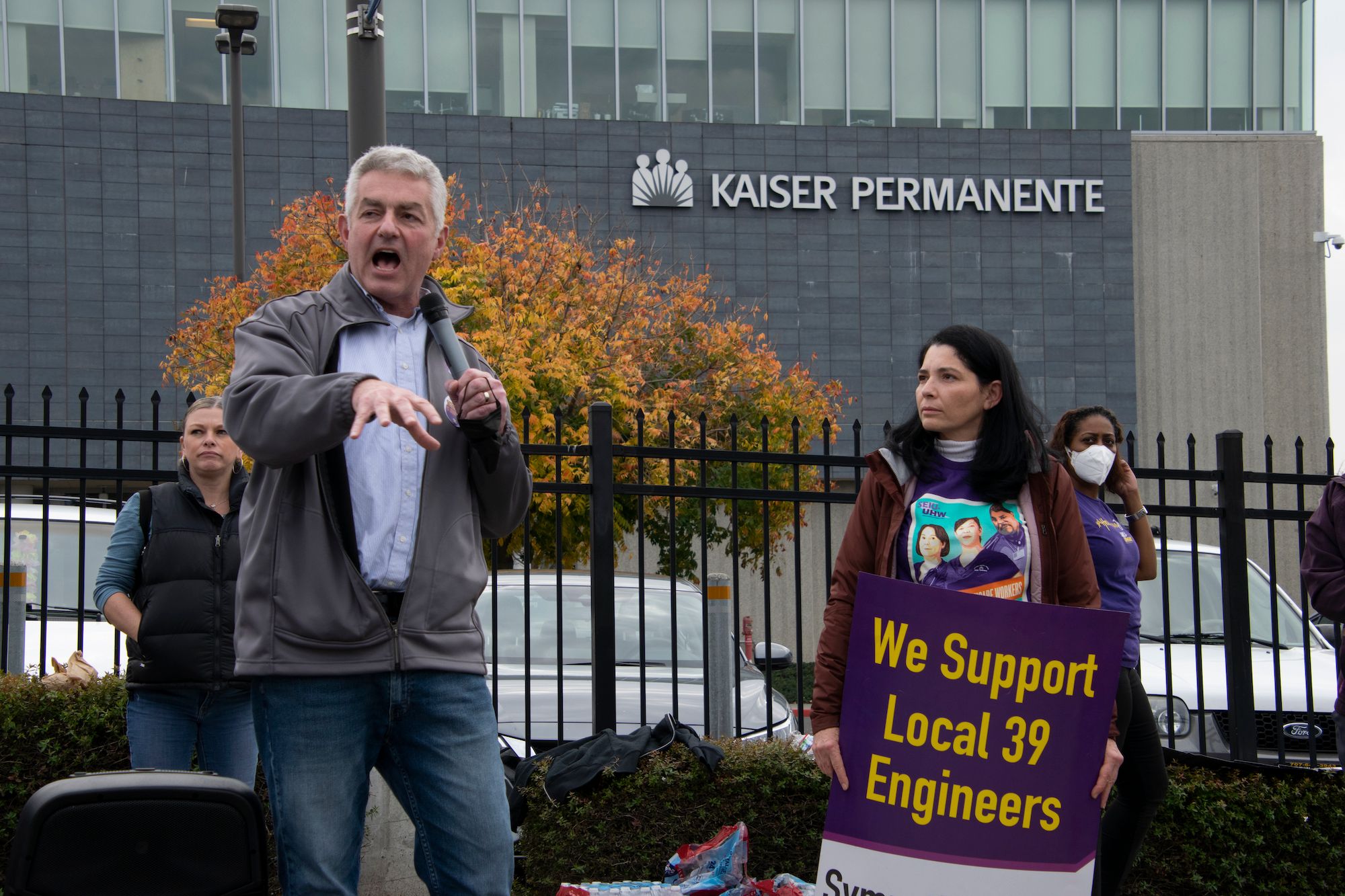 VALLEJO – Stationary engineers at Kaiser Permanente who have been on strike for over two months got a boost Thursday when other hospital workers joined them in a sympathy strike, including in Vallejo where a crowd of striking workers held a boisterous rally.

The IOUE Stationary Engineers Local 39 has been on strike since September at Kaiser locations across Northern California, including Vallejo.

The union represents workers at Kaiser facilities who maintain their HVAC, plumbing and electrical generation, as well as others who operate and maintain biomedical equipment such as CT scans, ventilators and heart monitors.

The California Nurses Association said its members would strike for 24 hours starting Friday morning at 21 facilities in Northern California, including in Vallejo and Vacaville.

SEIU-UHW President Dave Regan criticized the executive pay at Kaiser outside of the Vallejo facility on Thursday, saying CEO Greg Adams makes more than $12 million per year and three-dozen executives each make more than a million dollars per year each.

“The engineers have negotiated their contract for decades without incident,” Regan said. “Why the hell is this going on now, during a pandemic, during a time when healthcare workers are recognized universally as being heroes?”

Regan said that SEIU-UHW employees may need help from the engineers in the future. “Not because we did anything wrong,” he said, “but because some set of suits in Oakland thinks it makes sense to demand that frontline caregivers, frontline healthcare workers, make less and take less despite everything you’ve given.”

The engineers have accused Kaiser of neither negotiating in good faith nor offering a compensation package comparable to the industry standard for the size of its facilities. When their contract ended in mid-September, the union went on strike.

Wallace Mayfield, assistant chief engineer at Kaiser Permanente Vallejo Medical Center, said in an interview Thursday that members have come and gone from the picket line over the last two months and that striking for so long can be draining.

“You’ve got your highs and lows. Some days you feel good. Some days you’re upset — you get mad,” he said. “We’re not getting paid to be out here. We’ve all got families at home to support.”

In a statement released Thursday in response to sympathy strikes, Kaiser said it was negotiating in good faith and blamed the union for calling a strike.

“Our proposals to Local 39 will keep our engineers among the best compensated in their profession, at an average of more than $180,000 in total wages and benefits,” the statement said.

But workers have said that amount doesn’t reflect their actual compensation and includes an expensive Kaiser health plan.

“They made $6.4 billion during the pandemic when most people are losing their homes, their businesses, their livelihood, and on top of that they’re offering them such a disrespectful contract that, in California certainly, no one would be able to survive on that,” Allen said.

“Unionism as a whole is made to bring up the community and to make sure that everybody is respected and they’re part of taking care of that community,” he said.

SEIU-UHW’s strike ended at 7 a.m. on Friday, when the nurses’ strike was set to begin.