Video of the incident shows the dog latch onto the man's neck for 25 seconds.
Share this news on: 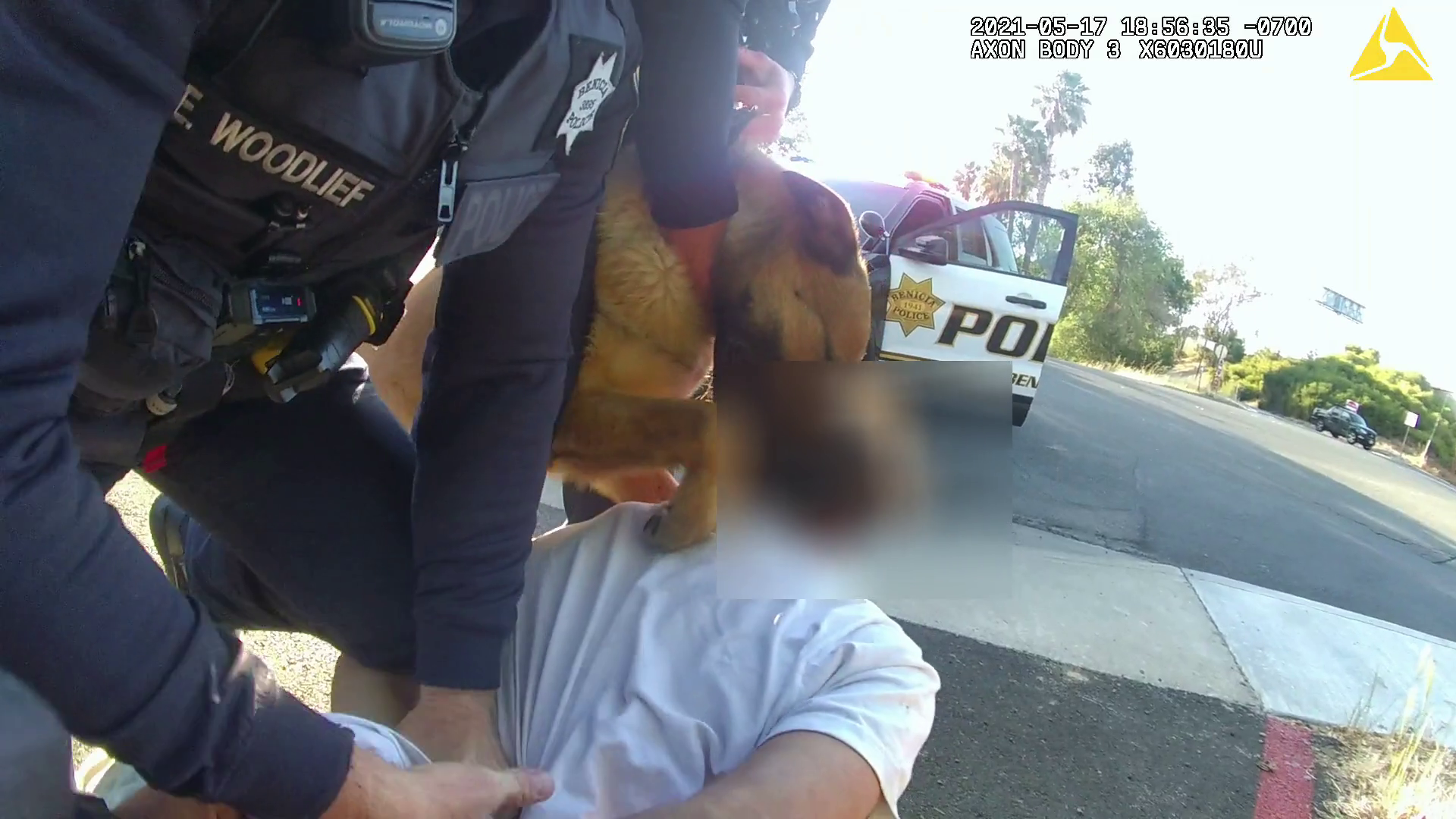 Still from a Benicia police body camera video showing a police dog biting a man's neck after the dog freed itself from a patrol car. Via public records request.

BENICIA – A Benicia police dog freed itself from an officer’s car and bit a man’s neck, causing a severe injury, when officers were investigating a report of shots fired last year, according to records obtained by the Vallejo Sun.

Police later determined that there was actually no gunfire. The man, Gary Gregory, was not charged with a crime.

Video of the incident obtained by the Sun shows the officers detain Gregory at gunpoint, then push him to the ground as he is kneeling with his hands on his head. Once they had him on the ground, the dog ran from the car and latched onto Gregory’s neck for 25 seconds. The dog’s handler pulled the dog from Gregory’s neck, which was bleeding profusely.

A claim against the city filed by Richard Madsen, an attorney for Gregory, states that Gregory needed life-saving trauma surgery and was left with permanent muscle and nerve damage, scarring and disfigurement. A claim is typically a precursor to a lawsuit. Madsen declined to comment.

An investigation conducted by Chaplin and Hill Investigative Services — a firm owned and operated by former law enforcement officers that Benicia hired to conduct its administrative investigation — determined that the dog had freed itself from a police car when its handler left the car door open. The firm concluded that Benicia police should change its policies regarding dogs to “protect the public from unintentional contact with the canine.”

“We take these types of incidents very seriously and had brought in a third-party impartial investigator to thoroughly look into the matter,” Benicia police spokesperson Irma Widjojo said in a statement. “We have put the recommended steps in place at the conclusion of the investigation.”

The Vallejo Sun learned of the incident through a public records request seeking information about police use of force incidents. The city did not disclose the incident when it happened and resisted providing any records or additional information, arguing it was not a police use of force under the law because the dog was not ordered to attack. Still, multiple officers at the scene said that the dog had done what it was “supposed to do.”

The dog, an 85-pound Malinois named Apollo, is under the supervision of Officer Christopher Francis. He told the outside investigators that he had been a canine handler for about four years before the incident. State records show that Francis has worked for the Benicia Police Department since 2016.

Three officers, including Francis, were twice called to the East N Street Trailer Park shortly before 7 p.m. on May 17, 2021, after multiple people called and reported hearing gunshots. When the officers arrived, they immediately found Gregory near the park entrance and ordered him at gunpoint to raise his hands.

He complied, raised his hands, backed up to the officers and knelt on the ground with his hands on his head. As Francis approached , Gregory turned and said that he was afraid of the dog.

According to the outside investigator’s report, Francis told investigators that when he touched Gregory’s left arm he “could feel [Gregory’s] arm tense up and he made the decision to push him to the ground.” As he pushed him down, Gregory rolled from side to side, and the dog ran from the car and bit Gregory’s neck. Francis did not give a warning prior to the dog attack.

“Up until I physically touched him, I would say he was very compliant,” Francis said in an interview with investigators, according to a transcript. “It was just up until right when he went down to his knees, once he started addressing the fact that there was a dog on scene, he could hear the dog, we could all hear the dog, that's when his resistance had changed.”

Francis grabbed the dog but could not get it to let go.

Another officer on scene, Andrew Stafford, said that the dog “literally came out of nowhere. It shocked me." He said that he was unsure whether Francis had meant to release the dog but thought he heard him say something under his breath like, "Fuck. No," when he started to pull the dog.

Once Francis pulled the dog off of Gregory, he put it back in the car. Gregory was bleeding profusely, with a long stream of blood left on the pavement. Francis took gauze from his car to hold on Gregory’s neck, as Gregory told him repeatedly that he couldn’t breathe.

Paramedics and other officers arrived. When Taylor recounted the story to Corporal Thomas Tom on body camera video, he did not address how the dog escaped except to say that he left his patrol car open and “the cage in the middle was open.”

Francis later told investigators that he had left a hatch open between the front and back seat of the car, which is designed to hold the dog, but didn’t think the dog could escape.

“I normally drive with it open,” Francis told investigators. “It's normally a few inches open, big enough for him just to get his nose through, and he'll randomly put his nose through and I'm just rubbing on his nose. No one's ever said I couldn't do it, and I've never read a policy that says I can't have it open.”

Francis told investigators he didn’t think that the dog could push open the hatch the rest of the way to escape, and he never had before.

“We’ve had numerous felony stops where I'm point man and my doors are open and we're giving commands and we're taking people out,” he said. “We're handcuffing. He's barking. He's never shoved that door open, and he's never gotten out.”

But despite that he had attacked Gregory without being commanded to, the officers there said that “the dog did what it was supposed to do.”

The third officer there, Officer Eric Woodlief, told investigators, “At that time, I thought he had a gun. He was actively fighting and with his hands by his waistband, that's not typical behavior. I thought it was a warranted use based upon what we had at that time, but I am not a K9 guy so I couldn't tell you if that was actually warranted.”

Francis later said that he had no concern about the dog’s behavior.

“To me, I felt Apollo did what he's been trained to do,” Francis said. “He recognized Dad being, what he interpreted as a threat or in some sort of distress, and he wanted to help.”

Francis also said that he had “gained confidence” in the dog. “As a handler, I consider this a street fight. He did what he's been trained to do,” Francis said. “I know he's going to do his job if he ever needs to.”

The outside investigators found in a report dated July 19, 2021, that Francis had violated department policy because he “neglected his duty to protect the public,” which “amounts to unsatisfactory work performance.” Benicia did not provide any records indicating the officer was disciplined and did not respond to questions about whether the officer was disciplined or whether the dog was still in service.

The report also recommended that Benicia amend its canine policy to add language to ''prevent the canine from escaping or self-deploying," or taking precautions to ''protect the public from unintentional contact with the canine.” The department said that it did.

The city resisted the release of the records of the incident. It first informed the Vallejo Sun of the incident in response to a records request last year for any records responsive to the police transparency law SB 1421, which compels police departments to make public records of use of force and some sustained misconduct investigations. But after months of delays, it concluded that the records were not responsive, arguing that the accidental release of the dog did not amount to a use of force.

“In this instance, no officer made a decision to use force via canine,” assistant city attorney Eli Flushman wrote in a letter to the Sun. “The injury sustained, while unfortunate, was the result of an accidental action of an animal.”

After the Vallejo Sun disputed this reasoning — by arguing that an accidental injury was still a use of force, such as in the accidental discharge of a firearm, and a matter of public interest — the city relented.

Correction: This article has been updated to correct the title of Assistant City Attorney Eli Flushman.