The case made national headlines because of Vallejo police Officer David McLaughlin’s apparent attempt to prevent his actions from being recorded.
Share this news on: 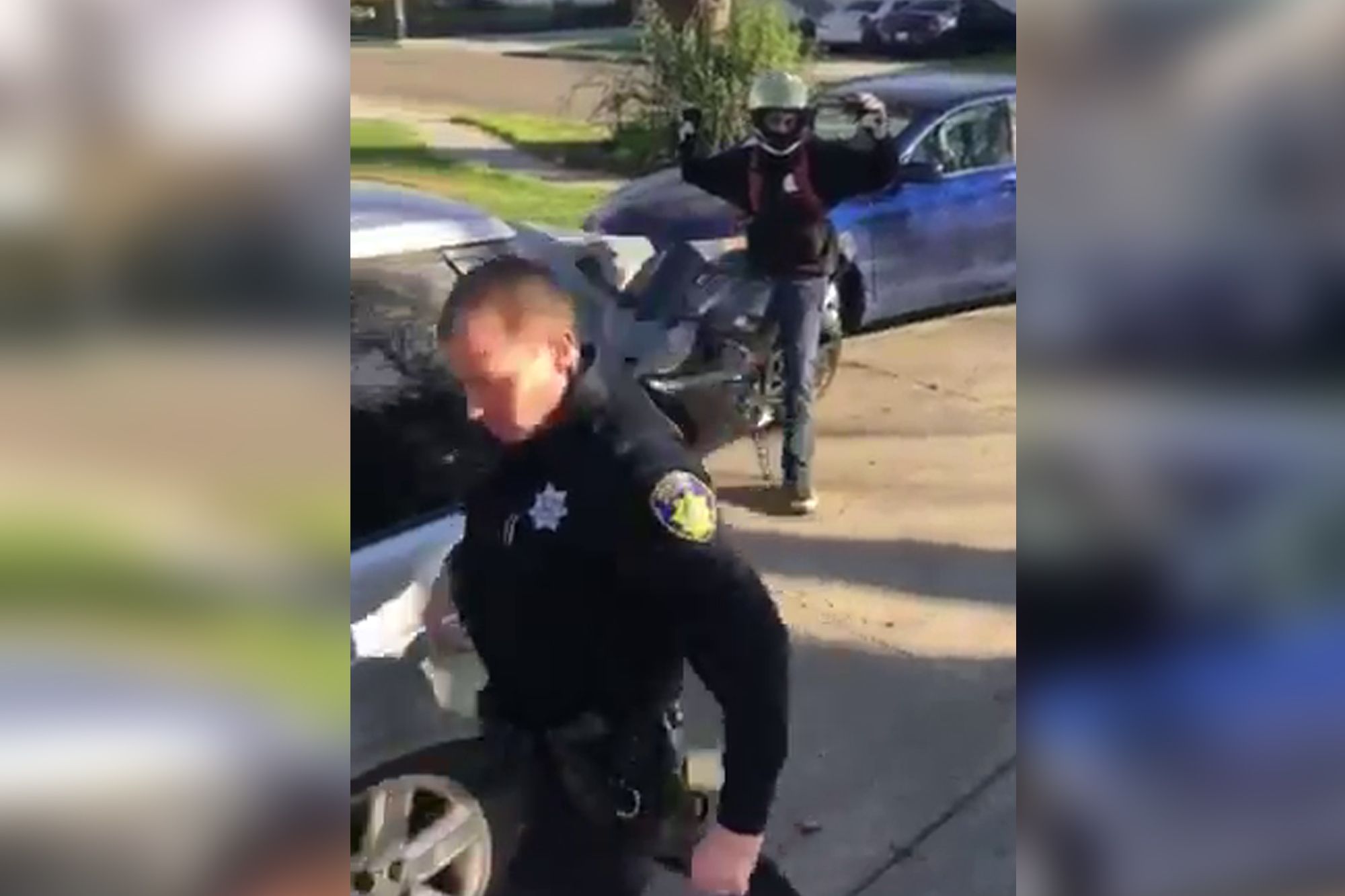 VALLEJO – The city of Vallejo has agreed to pay $300,000 to local filmmaker and U.S. Marines veteran Adrian Burrell, who filed an excessive force lawsuit against the city after he was tackled by a Vallejo police officer while filming a traffic stop in 2019, according to the settlement obtained by the Vallejo Sun via a public records request.

The case made national headlines because of Vallejo police Officer David McLaughlin’s apparent attempt to prevent his actions from being recorded. Burrell’s footage shows McLaughlin hold a motorcycle rider at gunpoint in the driveway of Burrell’s home.

Burrell filmed the stop from the front porch of his home about 30 feet away. When McLaughlin saw Burrell, he ordered him to stop filming and go inside. Burrell refused. McLaughlin holstered his weapon and approached Burrell.

Burrell said in his lawsuit that McLaughlin smashed his face into a wall and swung him into a pole. McLaughlin applied the handcuffs so tight it broke the skin on Burrell’s right hand and left his fingers numb, Burrell’s suit alleged.

Burrell, who issued a statement through his attorney Melissa Nold on Monday night, said the settlement money will be used to "seed the founding of a non-profit organization that will provide the families of individuals who are affected by police violence, and the survivors of community violence time and space to heal.”

“I was assaulted by a police officer who participated in blood rituals, the bending of badges to celebrate murders of black and brown folks," Burrell added in his statement.  “No amount of money can give back what was taken from me during this violent assault nor during the dehumanizing, patronizing and disrespectful litigation process."

The department is currently mired in a scandal in which some members of the department had the tips of their star-shaped badges bent following their involvement in a shooting.

McLaughlin testified in Solano County Superior Court last March that his badge was bent by former Vallejo Lt. Kent Tribble following McLaughlin's involvement in a 2016 shooting. Tribble testified that he brought badge-bending to Vallejo after leaving Concord police in 2003.

This isn’t the first excessive force settlement involving McLaughlin. The city agreed to a $270,698 settlement with Santiago Hutchins last year after McLaughlin held Hutchins at gunpoint while off duty in a parking lot outside a Walnut Creek pizzeria in August 2018 in an incident that was also caught on camera.

The incident began after the two men had an argument and ended up with McLaughlin, who was dressed in shorts and a white T-shirt, pointing his gun at Hutchins.

A Walnut Creek police officer and off-duty San Francisco sheriff's deputy showed up to the scene. With McLaughlin, all three took Hutchins to the ground.

McLaughlin admitted to striking Hutchins in the head after he said he "resisted attempts to be taken into custody, and refused to comply with commands to stop resisting," according to court records.

In 2014, David McLaughlin was named in a suit alleging that he and another officer pulled over Frederick Cooley without cause, held him at gunpoint and searched his car.

The complaint alleges they falsified a police report saying that Cooley was in possession of a controlled substance, but the Solano County District Attorney's Office later abandoned those charges. The civil case was dismissed after Cooley died.

Officer David McLaughlin has also been involved in two shootings since joining Vallejo police. He and Officer Matt Komoda fired on a suspect who was allegedly driving at them before crashing into a parked car on Aug. 31, 2016. No one was injured.

On Aug. 2, 2017, Komoda and David McLaughlin were two of five officers who shot and killed Jeffrey Barboa after a pursuit into Richmond.

Police rammed Barboa's car to disable it. Barboa got out of the car with a machete and the officers shot him. His death was later ruled a suicide.

The Burrell settlement is the latest to close an excessive force claim against Vallejo police.

Earlier this month, Vallejo agreed to pay $2.8 million to the family of Angel Ramos, a 21-year-old man who was shot and killed by a Vallejo police officer during a family fight in January 2017.

Editor's note: This article was updated to include a statement from Adrian Burrell.