The city defending itself in 23 federal civil cases involving Vallejo PD
Share this news on: 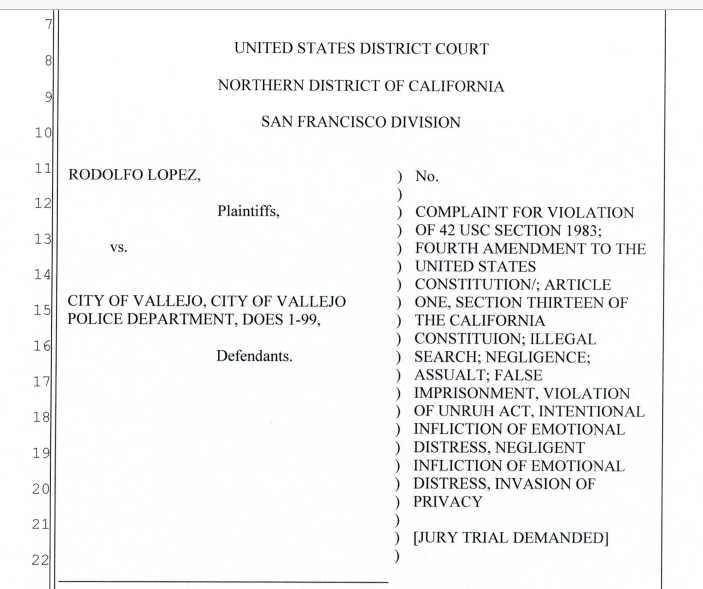 A Vallejo man is suing the city and Vallejo Police Department alleging he was the victim of excessive force after numerous officers entered his home without a warrant and physically assaulted him during a September 2018 incident.

In the lawsuit, filed in federal court on Aug. 18, Rodolfo Lopez alleges that four to six Vallejo police officers illegally entered his home to investigate why a vehicle was lodged against the garage door of the residence. The officers made their way to a back room of the residence where Lopez was speaking on the phone, the lawsuit states.

The officers knocked on the door to the room before they “stormed into the room, grabbed (the) plaintiff, threw him to the ground and began hitting him on the head and body with their batons and bodies causing plaintiff serious bodily injury and damages,” the lawsuit alleges.

The lawsuit, which doesn’t name the involved officers, was filed by the San Rafael based Law Offices of Kevin Heaney. Lopez is seeking general and punitive damages, along with attorney’s costs.

Lopez’s civil case is the 23rd excessive force and/or wrongful death lawsuit the city of Vallejo is currently fighting in federal court.

This tally includes the lawsuit recently filed by the family of Sean Monterrosa, the 22-year-old San Francisco man fatally shot by a Vallejo police officer on June 2.

Filed on Aug. 6, the lawsuit alleges Vallejo police Officer Jarrett Tonn was “trigger happy” when he fired five times through the windshield of a moving police vehicle, hitting Monterrosa once in the neck outside the Vallejo Walgreens on Redwood Street.

Various media outlets, including the Bay Area News Group, Vallejo Times-Herald, and the independent newsroom Open Vallejo, named Tonn as the shooter days after the incident. The city of Vallejo has yet to officially name Tonn, in part, because the Vallejo Police Officers’ Association (VPOA) filed a temporary restraining order blocking release of Tonn’s name.

The lawsuit also calls out Vallejo police Chief Shawny Williams for allegedly changing his initial story that Monterrosa “was on his knees with his hands being raised above his waist, with no object in his hands,” to a narrative that aligns with the union’s stance on what happened.

The union has claimed that as Monterrosa was fleeing he “abruptly pivoted back around toward the officers, crouched into a tactical shooting position, and grabbed an object in his waistband that appeared to be the butt of a handgun. At no time did Mr. Monterrosa make any movements consistent with surrendering.”

Tonn, and two other officers, was responding in an unmarked police vehicle to various reports of looking and vandalism at the Walgreens. As they neared the building, Monterrosa and several others were seen running away from the pharmacy drive-through lane. Before the vehicle stopped, Tonn fired five shots from his AR-15 from the backseat of the vehicle.

Police have previously said that Tonn thought the handle of a 15 inch hammer in Monterrosa’s sweatshirt pocket was a gun.

The city of Vallejo is defending itself in several other wrongful death suits. They were filed by the families of Angel Ramos, Ronell Foster, and Willie McCoy – all shot and killed in separate encounters with Vallejo police officers.

Vallejo and Foster’s family agreed to a $5.7 million settlement in late July.

Foster was fatally shot by Vallejo police Officer Ryan McMahon after the two struggled behind a a building in the 400 block of Carolina St. on the night of Feb. 13, 2018.

McMahon told investigators that he saw Foster riding a bicycle in the downtown area and attempted to “educate” the man about the dangers of not having a light on the bicycle and riding recklessly.

Foster fled, leading McMahon on a chase over several city blocks, with Foster ultimately ditching his bicycle. McMahon said he got out of his cruiser and chased after him.

During the foot pursuit, McMahon reported that he saw Foster reaching for his waistband several times. Thinking Foster to be armed, McMahon fired his Taser, which had no effect as Foster continued to run, until falling along a walkway behind the Carolina Street building.

Catching up to Foster, the officer pushed him down as Foster tried to get up. That’s when McMahon said he used the drive stun approach of placing the weapon against Foster’s bod, which also didn’t work.

McMahon said that he feared for his life when Foster “ripped” the officer’s flashlight from his hands.

“This guy just took my light from me, we’re fighting and nothing I’ve used on him is working. He is gonna smack me in the head,” McMahon said to investigators. “He’s gonna take my gun and shoot me or he’s gonna beat me down with my own flashlight and there’s nobody here to help me and nobody knows where I’m at.”

McMahon would go on to participate in the fatal shooting of Willie McCoy almost a year later. McCoy, 20, of Suisun City was shot over three dozen times by six Vallejo police officers outside a local Taco Bell on the night of Feb. 9, 2019.

An investigator hired by the city determined the six officers fired 55 bullets at McCoy in 3.5 seconds. McCoy appeared to be unconscious or asleep in the driver’s seat of his car with a gun in his lap leading up to the shooting.

In early August, the city released a few hundred pages of investigative files pertaining to the McCoy shooting. An autopsy performed on McCoy’s body discovered he suffered 38 gunshot wounds, including being shot in the lungs and heart.

An internal affairs report recommend that McMahon, who fired his weapon once, should be terminated for firing his weapon while his partner was in McMahon’s “cone of fire.” The department argued McMahon could have accidentally shot his partner.

Vallejo police Chief Shawny Williams agreed with the recommendation in a March 2020 memo. However, the department said that as of August McMahon was still on paid administrative leave.

McMahon violated three department policies, with any of them being enough to support termination, Williams wrote. He further said the officer’s actions were “dangerous,” and not part of the department’s “safety norms” for handling firearms.

Burrell, a Bay Area artist and filmmaker, filmed a traffic stop from his porch nearly 30 feet away involving his cousin Michael Walton. Burrell’s video, which went viral, showed the officer holding Walton at gunpoint before then ordering Burrell to go inside his home.

He refuses. McLaughlin then approaches Burrell and attempts to arrest him. That’s when McLaughlin throws him into a wall and wooden post, giving Burrell a concussion and other injuries, Burrell’s lawsuit alleges.

Editor’s Note: This article was updated on Sept. 5 to include information about the settlement agreement between the city of Vallejo and Foster’s family.