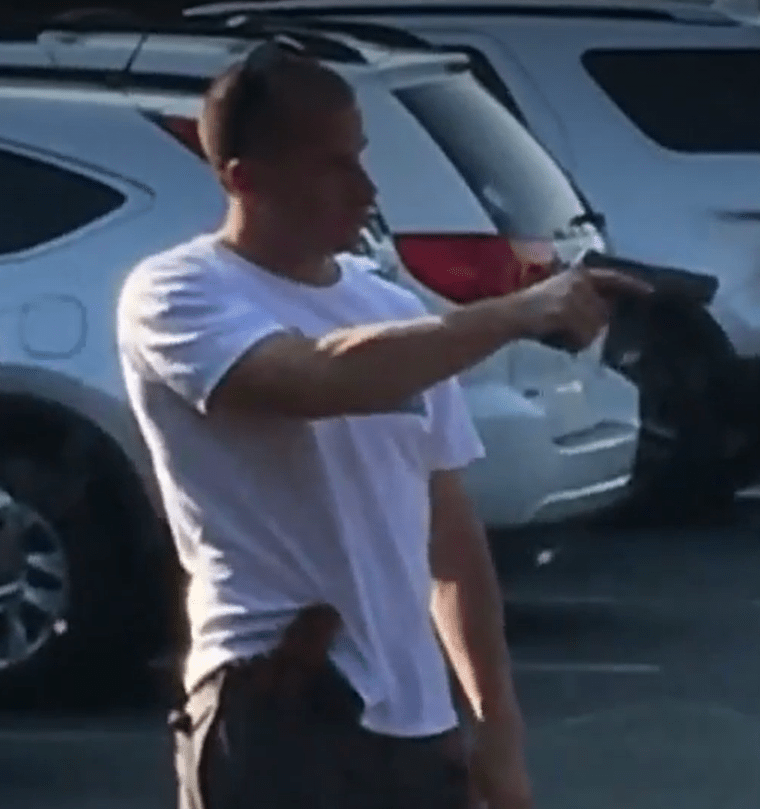 Vallejo police Officer David McLaughlin pointing his gun during an off-duty incident in 2018.

VALLEJO – The Vallejo City Council will receive an update on the status of two different lawsuits filed against the city including an excessive force lawsuit alleging an off-duty Vallejo police officer repeatedly slammed a man’s head against the pavement following a verbal argument outside a Walnut Creek pizzeria in August 2018.

A now viral video shows Santiago Hutchins being held at gunpoint by Vallejo police officer David McLaughlin in a parking lot outside the business on Aug. 11, 2018. Hutchins has his hands above his head, while McLaughlin, dressed in a white t-shirt and shorts, points his service weapon at the man. The incident began after a verbal argument between the two men.

Hutchins filed the excessive force lawsuit against the city and McLaughlin about a year after the incident.

McLaughlin, along with San Francisco sheriff’s deputy Fabian Perez, who was also off-duty at the time, and Walnut Creek police officer Maryann Grubb, who responded to the incident are accused of violently taking Hutchins to the ground.

In response to the lawsuit, McLaughlin admitted that he struck Hutchins in the head multiple times after the man “resisted attempts to be taken into custody, and refused to comply with commands to stop resisting…”

“In the process of going hands on and wrestling Plaintiff down to the ground, Defendant McLaughlin recklessly lost his unholstered firearm, which was later recovered about 3-5 feet from where Mr. Hutchins was taken down, lying in the roadway,” according to court records.

Additional courts show that a settlement conference was held on March 11 with both sides settling “the non-fees part of the case.” The two sides are expected to reach a monetary settlement soon.

This isn’t the first time McLaughlin was captured on film using force against someone. Video from January 2019 shows McLaughlin, while on duty, holding a man at gunpoint during a traffic stop. The officer is seen pointing his weapon at Michael Walton, who is on a motorcycle, while Adrian Burrell films the stop from the front porch of his home – about 30 feet away.

McLaughlin orders Burrell to stop filming and go inside. When the man refuses, McLaughlin approaches and throws him into a wall and wooden post, giving Burrell a concussion and other injuries, according to an excessive force lawsuit Burrell filed against the city.

The council is also expected to get an update on a lawsuit filed by former Vallejo police Lt. Michael Nichelini. Nichelini, who is still the president of the Vallejo Police Officers’ Association, is seeking $10 million in damages from the city and his old job back.

Nichelini filed an amended complaint in early April, alleging the city and Vallejo Police Department have sought to destroy Nichelini’s career, according to a report by the Bay Area News Group.

In his lawsuit, Nichelini claims he was subjected to retaliation, intimidation and, harassment, from Vallejo Police Chief Shawny Williams and other top-ranking city officials.

He further argues the allegations against him – including trying to intimidate a journalist – were created “to avoid the political ramifications of their own mismanagement of VPD public relations and citizen dissatisfaction with the VPD and the City’s job performance.”

Finally, the council in closed session will get information about three new possible pieces of litigation against the city of Vallejo.

The seven-person council will meeting during a special closed session at 5:30 p.m. Tuesday via teleconference.

Members of the public may provide public comments during the meeting via ZOOM by
visiting https://ZoomClosed.Cityofvallejo.net or joining by phone: Dial: (669) 900­6833, enter Meeting ID: 8452542999. Press *9 to digitally raise your hand from the phone.