Ian Schmutzler previously headed the department following the sudden retirement of Chief John Carli in February.
Share this news on: 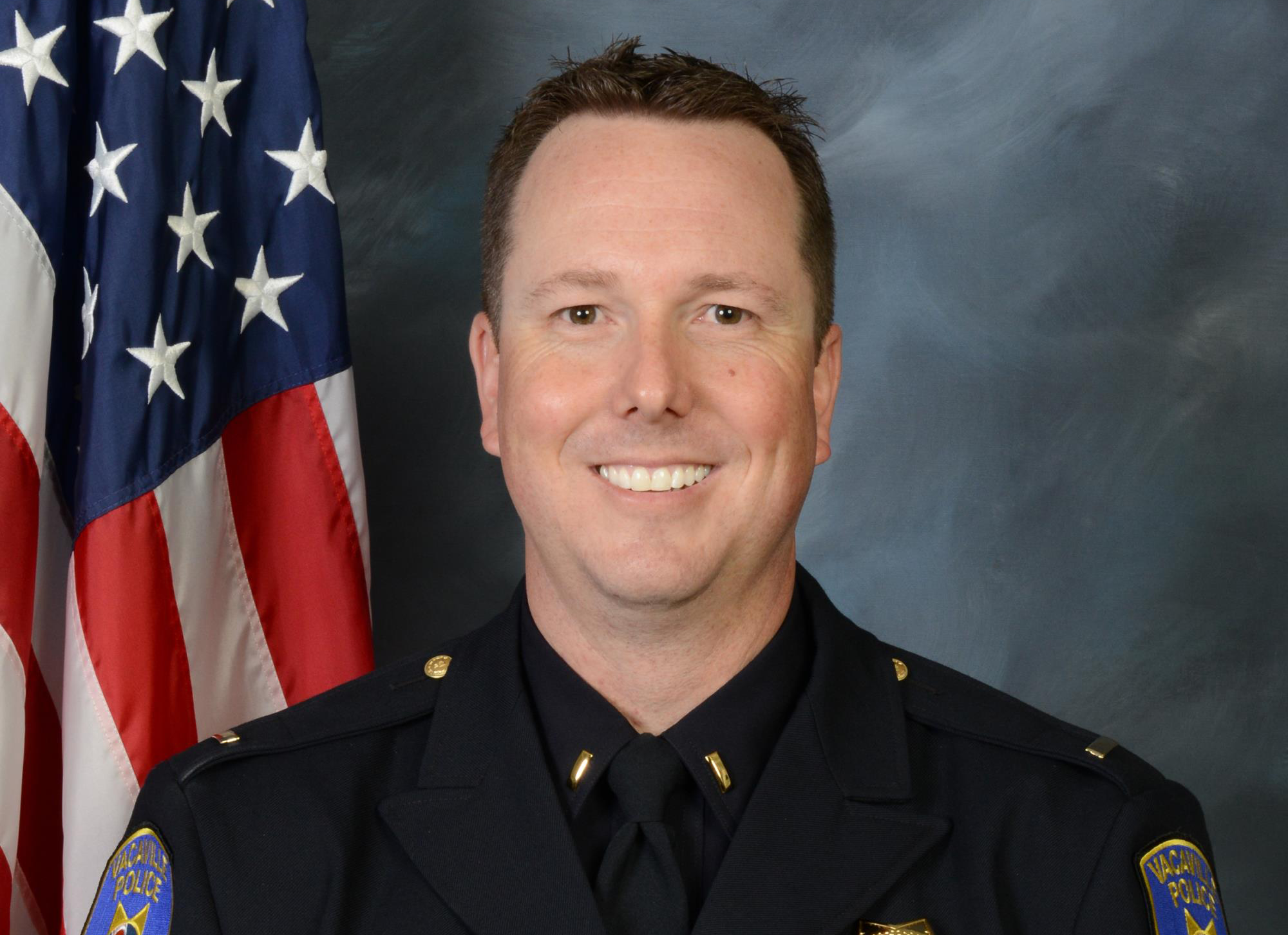 VACAVILLE – The city of Vacaville has appointed Capt. Ian Schmutzler as the department’s permanent police chief, the city announced Wednesday.

Schmutzler has been with the department for nearly 22 years. He started his career as a police officer in Oakland in 1997 and transferred to Vacaville in 2000, according to his LinkedIn profile. He was promoted to detective in 2003, sergeant in 2006, lieutenant in 2011, and captain in 2014.

Schmutzler also is an instructor in criminal justice at Napa Valley College and an associate professor at Union Institute & University, a private Ohio-based school that specializes in distance learning.

“I acknowledge the depth of work ahead as the expectations of policing continues to evolve in our community and across the nation,” Schmutzler said in a press release the city issued Wednesday. “I hope to come together to collaboratively tackle challenges and collectively celebrate successes!”

Mayor Ron Rowlett praised the city’s recruitment process, led by city manager Aaron Busch. “I am highly encouraged that this comprehensive process yielded one of Vacaville’s finest,” Rowlett said in a statement.

Schmutzler previously headed the department following the sudden retirement of Chief John Carli in February, which kicked off the search for a permanent chief. Carli officially retired in April, but announced his retirement on Feb. 19 and went on leave four days later.

According to his LinkedIn profile, Carli has since gone to work for Lexipol, a company that drafts policies for police departments designed to limit liability.

Carli left as the department contended with problems on multiple fronts. After video of an officer hitting a dog went viral in December 2020, the department was criticized for its response. Meanwhile, regular protests had grown tense. The police station was vandalized during protests in January. A week later, Vacaville police violently arrested four protesters in an unrelated incident and seized their phones.

Schmutzler was acting chief until May, when the city appointed former Fairfield police Chief Joseph Allio as the city’s interim police chief. Allio, who also served as interim Vallejo police chief in 2019, said Vacaville police would conduct a management audit during his tenure.

The city did not respond to questions about the recruitment process, including the number of applicants and whether anyone outside the agency was a finalist for the position.

“Chief Schmutzler possesses an in-depth familiarity of the Vacaville Police Department with a vision for new enhancements that will be invaluable as he leads the Department through the recently launched audit process, and into the anticipated next steps of community policing and engagement efforts,” Busch said.

Schmutzler’s record in the department is not unblemished. In 2017, he was named in a lawsuit alleging excessive force and racial discrimination as the head of the department’s field operations bureau. The suit alleged that he praised an officer who injured a man’s shoulder while at the hospital where the man was being treated.

In the lawsuit, Nick Buckhalter, a 60-year-old Vacaville resident, alleged that Vacaville police Officer Daniel Torres injured his shoulder at his Vacaville home while he was preparing to move. While Buckhalter was loading a stored vehicle onto an auto transport truck, he accidentally revved the engine and the tires squealed, according to the suit.

Torres arrived and decided to handcuff Buckhalter. Buckhalter told Torres that he had his left shoulder replaced with an artificial implant as treatment for a damaged rotator cuff and could not put his hands behind his back without risking injury. Despite that, Torres forced Buckhalter’s hands behind his back and then he and another officer pushed him onto his stomach, according to the suit.

Torres later took Buckhalter to a hospital to treat his shoulder injury, the lawsuit states. Schmutzler met Torres at the hospital and discussed the arrest within earshot of Buckhalter. According to the suit, Schmutzler patted Torres on the back and said, “Good job. Good job. You’re going to go far in this department.”

Court records indicate the case was settled in February 2020, but do not disclose the terms of the settlement. The city did not immediately respond to questions about the settlement terms and whether city officials considered the allegations when deciding whether to promote Schmutzler.

Schmutzler will formally take over the department when he is sworn in on Jan. 7, according to the city.