The residents have vowed to fight yet another eviction, demanding the city provide services and viable options to live, rather than continually evicting them.
Share this news on: 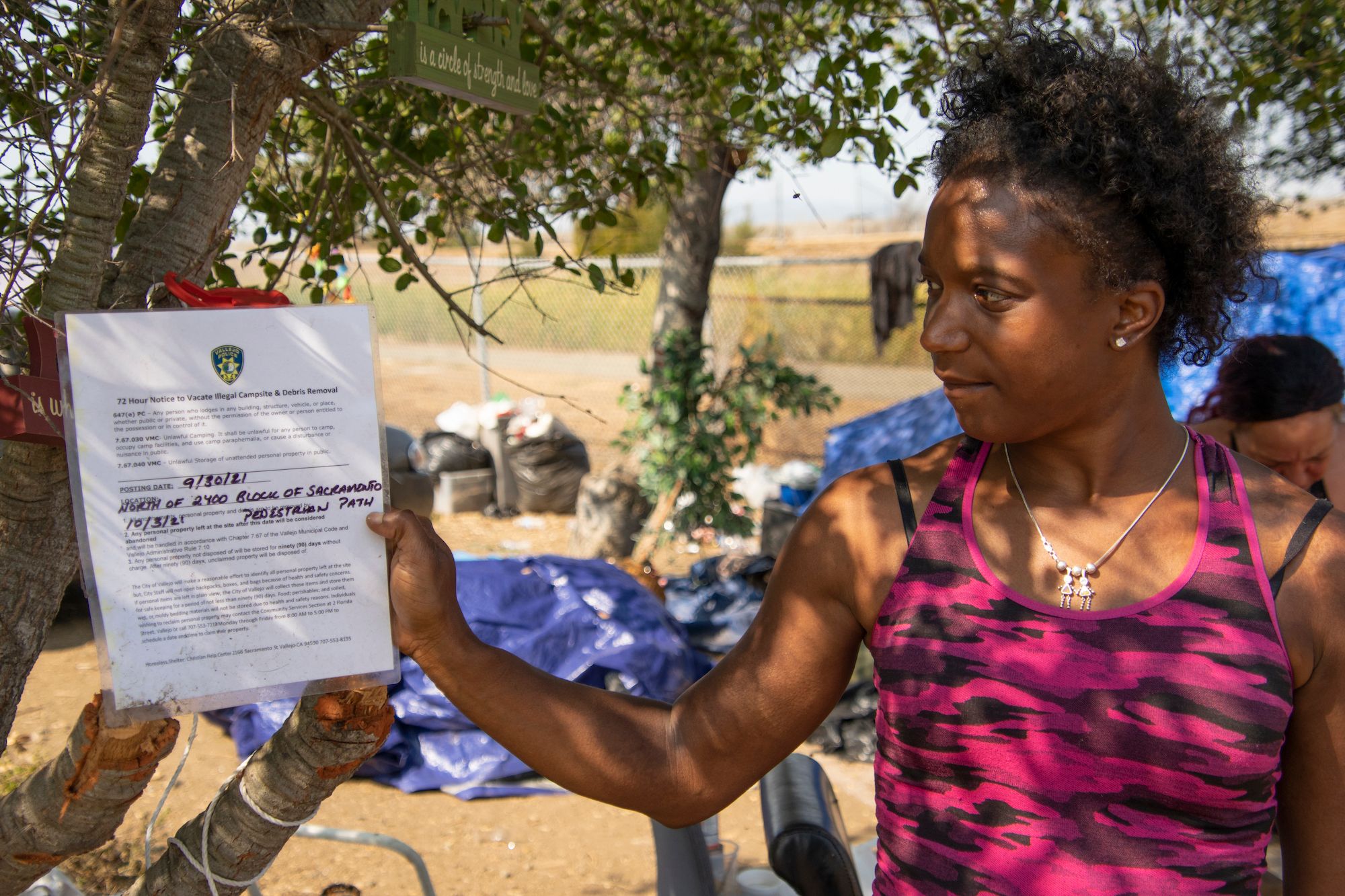 VALLEJO – Residents of a Vallejo homeless encampment have signed a federal complaint seeking to prevent the city from evicting them from a vacant lot near Austin Creek, alleging that police send them from place to place and destroy their possessions while giving them no support or options for housing.

About 20 people have been living in the camp, just off state Highway 37 and Sacramento Street, for several months. It is not accessible or visible from the road and residents say they have received no complaints from neighbors, who have occasionally provided the people living there with supplies.

But Vallejo police posted 72-hour eviction notices there last week, citing state and city anti-camping ordinances. It is not clear from county records who owns the property. Vallejo police did not respond to a request for clarification of the reason for the eviction.

The residents have vowed to fight yet another eviction, demanding the city provide services and viable options to live, rather than continually evicting them.

On Monday, the residents signed a complaint to be filed on their own behalf in U.S. District Court, arguing they have been refused shelter elsewhere, there is no viable location that wouldn’t be subject to further eviction, and  they have made substantial efforts to not cause harm to the community. They say they pick up trash and fires and crime have not been a problem there.

“They can’t just evict people and treat people the way they’re treating people,” said Barbara Dorsey, who said she has lived at the camp for three months. “This is a crisis out here and it needs to be addressed instead of being just swept under the rug and they just bully the homeless.”

Dorsey said she has been homeless for about six to eight months. She said she started losing control of her life after Vallejo police killed her brother, Willie McCoy, in the drive-thru of a Taco Bell in February 2019. McCoy was found asleep in his car, allegedly with a gun on his lap, when six police officers shot at him 55 times.

Dorsey said she works as an in-home caregiver, but she’s had trouble keeping the job because she doesn’t have a home. At one point, she said, she was sleeping in her car, which scared her because of the way her brother died, but Vallejo police towed it. The towing fees were so expensive that the family she does caregiving for bought her a new car so she could get to work.

During an eviction, Dorsey said the police routinely destroy her possessions, like tents, clothes and food, with no clear way to recover it. The city’s eviction notice says the city will make a “reasonable effort” to identify personal property and store it for at least 90 days, but Dorsey said each time she has been evicted her possessions have been thrown in the trash.

Courts have held that cities can’t criminalize homelessness or destroy people’s possessions in camp cleanups. In one case in Boise, Idaho, the 9th Circuit Court of Appeals ruled the city could not enforce anti-camping laws if there was no shelter available. Last year, CalTrans agreed to reimburse more than 1,000 people in Oakland and Berkeley for destroyed property as part of a class action settlement.

The city of Vallejo has promised to construct a new navigation center, but as of May the city had not started building it and the budget had ballooned from $2.3 million to $9 million. Days after those revelations to the city council, housing manager Judy Shepard-Hall was placed on administrative leave.

The city of Vallejo directs people evicted from camps to the Christian Help Center, a 75-bed facility at 2166 Sacramento St., but residents say it is frequently full. The most recent survey of homeless residents conducted in Solano County in 2019 found there were 1,151 people who were homeless and 81% lacked shelter. Half reported living in Vallejo at some point during the previous year.

Dorsey said in her current camp, residents are responsible and look out for each other. They are asking the city to help them with resources, like trash pickup and porta potties, so they can keep the area clean.

“When you get into a community like this one where everybody's mature adults, people work here, nobody’s just sitting around hanging out,” Dorsey said. “We all watch over each other’s stuff so nothing is left unattended.”

“Being a part of a community is a blessing, because I’m usually by myself and having somebody who will look out for me when I’m sleeping, without having to worry about getting raped or robbed or something, it’s a blessing,” Dorsey said. “Everybody works together here, if I can't afford food or something one day, somebody is gonna make sure they feed you.”

Correction: This article has been updated to note that the complaint was not able to be properly filed on Monday but is expected to be filed soon.