They allegedly deleted WhatsApp group messages with Steven Carrillo, who is charged with murder and attempted murder for allegedly killing two law enforcement officers and wounding two others last year.
Share this news on: 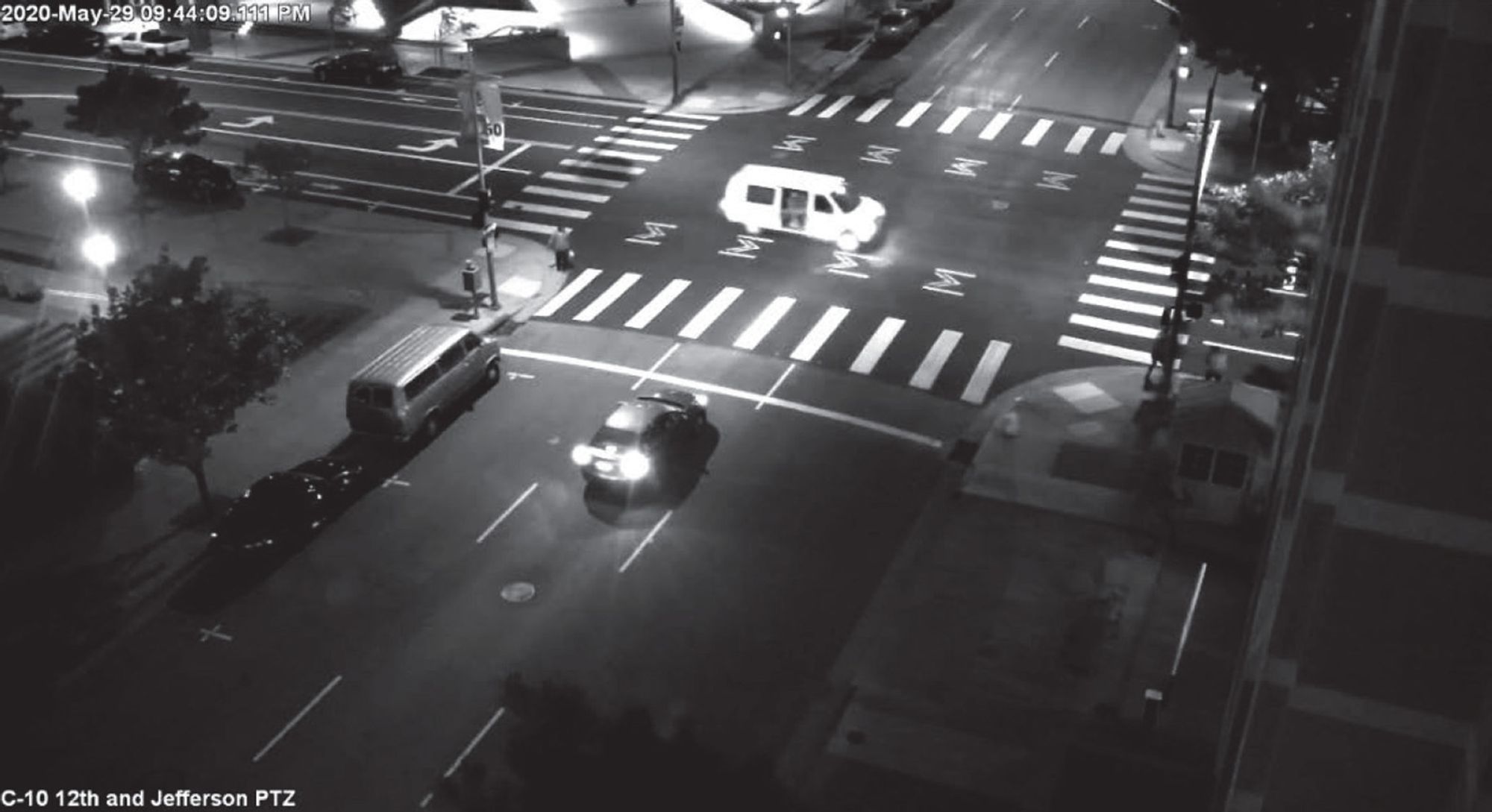 Surveillance video captured a white van passing the federal courthouse in Oakland, where an occupant killed a police officer and wounded another on May 29, 2020. Photo: U.S. Attorney's Office for the Northern District of California.

SAN FRANCISCO – Two admitted members of the right-wing Boogaloo Bois pleaded guilty in federal court in San Francisco on Monday to destroying records relating to the murder of police officers in Oakland and Santa Cruz County by an active-duty U.S. Air Force sergeant who was stationed at Travis Air Force Base in Fairfield.

Jessie Rush, 29, and Simon Ybarra, 24, each pleaded guilty to a single count of conspiracy to destroy records to impede a criminal investigation. The charge has a maximum sentence of 20 years in federal prison. But according to a plea agreement with prosecutors, each will likely face six months to a year in prison and three years of supervised release when they are sentenced early next year.

Another defendant, Robert Blancas, pleaded guilty in a separate agreement in August and a fourth, Kenny Miksch, is expected to plead guilty next week.

All four were charged in April with conspiring to destroy records, destruction of records and obstruction of official proceedings after they allegedly deleted WhatsApp group messages with Steven Carrillo, who is charged with murder and attempted murder for allegedly killing two law enforcement officers and wounding two others last year.

Carrillo reached out to the group as sheriff’s deputies were closing in on his father’s home in Santa Cruz County in June 2020. He wrote, “dudes I offed a fed,” in a WhatsApp message, apparently admitting to killing a federal police officer in Oakland. Shortly after he sent the message, he allegedly killed a Santa Cruz County sheriff’s deputy and wounded another in a shootout before he was arrested.

Prosecutors said that Rush instructed Carrillo to erase his phone to destroy the messages. He and Ybarra admitted Monday to destroying the records on their own phones, but the information was recovered from Carrillo’s.

Carrillo joined the Air Force in 2009. By 2018, he was stationed at Travis Air Force Base, where he was an apprentice in an elite security unit that gave him special training in combat techniques, explosives and firearms. Carrillo has said in interviews that he was introduced to the Boogaloo Bois through friends in the Air Force and on the internet. The FBI has said that Carrillo was associating with prominent Boogaloo Bois by late 2019.

The Boogaloo Bois are a loose-knit militia group that has largely organized online and seeks to spark a second civil war. Adherents often use deceptively innocuous terms and imagery, referring to the movement as the “big igloo” or “big luau” and adopting Hawaiian shirts as a uniform.

In April 2020, Rush founded a militia group called the “1st Detachment, 1st California Grizzly Scouts” and named himself the commanding officer with the rank of major, going by the alias “Grizzly Actual.” Prosecutors said he appointed Blancas, aka “MuskOx” or “Orgotloth,” and Miksch, aka “Senpai” or “Not ATF,” as lieutenants and Ybarra, aka “Shepard,” a corporal who was in charge of recruitment.

The group communicated via a Facebook group called “/K/alifornia Kommando” and a WhatsApp group called “209 Goon HQ” and met several times for in-person training, including for firearms training. Prosecutors said that they considered law enforcement officers to be “enemy forces” and that they discussed taking prisoners, using lethal force, and tactics for killing police.

By late May, Carrillo had joined the group and they were discussing plans to spark a civil war, prosecutors wrote in court filings. Ybarra allegedly met with Carrillo behind a gas station in Los Gatos, where they assembled an assault rifle in his van. Prosecutors said Carrillo contacted Ybarra about attending a protest in Oakland on May 29 over the police murder of George Floyd, intending to use the protest as cover to “snipe some you know what’s.” But Ybarra never responded, prosecutors said.

While Ybarra and Rush did not sign on to Carrillo’s plans to immediately attack police, prosecutors said they didn’t object on principle but wanted to take a more tactical approach. In one message, Rush wrote, “We can start developing case files, gathering intel, and doing it just like big bro does,” and then, “im not about the fireworks… im more like a surgeon,” according to court documents.

Carrillo did in fact go to a protest in Oakland on May 29, according to prosecutors. While another alleged Boogaloo Boi, Robert Justus Jr., drove Carrillo’s van past the Ron V. Dellums federal courthouse, Carrillo opened fire on two police officers, killing David Underwood and wounding the other.

A few days later, on June 6, Santa Cruz County sheriff’s deputies were investigating an abandoned white van with firearms, ammunition and bomb-making equipment at a property in Ben Lomond, an unincorporated area in Santa Cruz County.

As they approached the property, Carrillo allegedly texted the group asking for assistance, saying that police were approaching his property and he would likely be involved in a shootout. The others in the group responded that they couldn’t get there in time and questioned whether the officers were there for Carrillo. After he said he’d “offed a fed,” Rush told him to delete the communications and he and the others in the group did.

As the deputies approached Carrillo’s location, he allegedly opened fire on them, killing Sgt. Damon Gutzwiller and wounding another. Carrillo fled and carjacked a Camry. He abandoned it and allegedly smeared “BOOG” and “I became unreasonable” in his own blood on the hood of the car. When he tried to steal a second car, the owner tackled and disarmed him, swatting away Carrillo’s gun and a pipe bomb. Carrillo was arrested a short time later.

Miksch is scheduled to change his plea to guilty on Monday as part of the same deal with prosecutors as Rush and Ybarra. Blancas reached a separate deal and has been facing separate federal charges for child enticement after searches allegedly revealed sexual chats with a 15-year-old girl.

Rush and Ybarra were out of custody when they appeared in court on Monday. Rush nearly lost his freedom earlier this month, after his wife harassed pretrial services officers when she learned that her communications with Rush had been subject to electronic monitoring. Rush, however, appeared to be complying with the terms of his release and was allowed to remain free under the supervision of his father, who sat next to him in court on Monday. Ybarra appeared alongside his parents.

Rush is scheduled to be sentenced on Jan. 10 and Ybarra on Feb. 7.