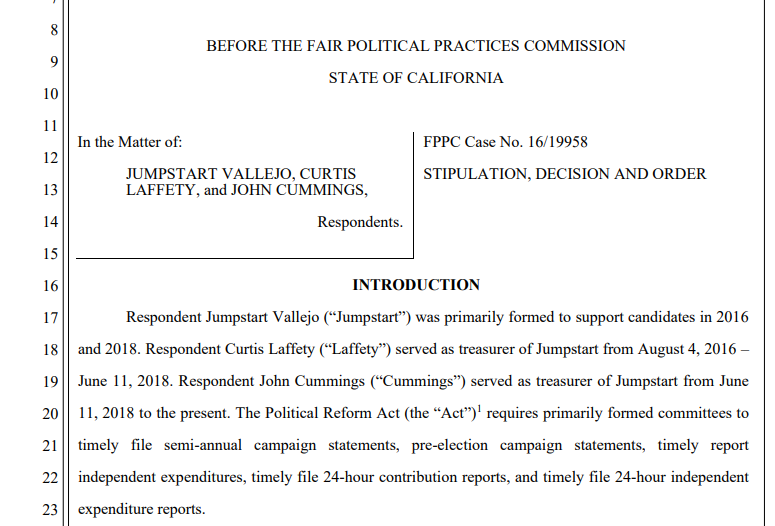 JumpStart Vallejo is facing a $14,000 fine from the state’s election watchdog after the primarily formed committee was accused of failing to file multiple forms in a timely matter over a span of two years.

The Fair Political Practices Commission (FPPC) will make a decision on the recommended fine at its Sept. 17 meeting.

The committee’s two treasurers, Curtis Laffety, who served from 2016-2018, and John Cummings, from 2018 to the present, are also named in the FPPC stipulation outing six violations of the election code.

In a third violation, Cummings and JumpStart are accused of failing to file a semi-annual and pre-election campaign statements from Jan. 1 through Sept. 22, 2018.

In addition, the commission noted JumpStart failed to report it received large monetary donations within a 24-hour period as required by election law. They include:

The FPPC says similar failures tool place during the 2018 election when JumpStart failed to file reports stating it received $27,500 from August to October 2018.

Finally, the FPPC said JumpStart failed to submit multiple expenditure reports within 24 hours, as required by law. This includes two separate expenditures of $29,000 in October 2018.

FPPC staff is recommending JumpStart be fined only $14,000 opposed to the $30,000 the committee could be hit with under the election code.

Originally formed ahead of the 2013 Vallejo City Council elections, JumpStart is supported by various unions and local businesses, including the Napa/Solano Central Labor Council, and the International Association of Fire Fighters (IAFF) Local 1186.